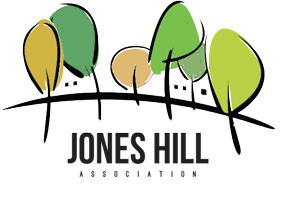 The most basic level of support for the JHA; to vote at Jones Hill Association meetings, you must donate at least at this level.

At this enhanced level of support, JHA will be able to further its mission and sponsor additional projects.

Highest level of support; JHA can make significant progress toward projects that make the neighborhood vibrant

Highest level of support; JHA can make significant progress toward projects that make the neighborhood vibrant

Donate any amount to the JHA

Settled by passengers from the Mary and John about June 1, 1630, Dorchester originally was one of the largest towns in the Massachusetts Bay Colony and included South Boston, Hyde Park, Milton, Wrentham, Stoughton, Dedham, Sharon, Foxboro, and Canton. The town remained a rural farming community until its annexation to Boston on January 4, 1870.

Each of Dorchester’s villages has played a part in its history: Mattapan, Neponset, Cedar Grove, Lower Mills, Peabody Square, Field’s Corner/Commercial Point, Codman Square, Franklin Park/Franklin Field, Meeting-House Hill, Glover’s Corner/Savin Hill, Grove Hall, Upham’s Corner, and Edward Everett Square/Columbia. Dorchester’s residents have seen and participated in every event in our country’s history including the Salem witch trials, the King Philip War in 1675-76, the French & Indian War, Shay’s Rebellion and many others. The population has grown from 2,347 in the year 1800 to 8,000 in 1850 to 40,000 in 1892 to 125,000 in 1917. The explosive increase in numbers occurred after Dorchester’s citizens passed the motion for annexation with 928 voting in favor and 726 opposed.

The town was first to use public tax money for the support of its schools. Dorchester was the first in organizing the New England town government, choosing twelve men in 1633 as selectmen or townsmen. The first grist mill was started on the Dorchester bank of the Neponset River by Israel Stoughton in 1634. Walter Baker & Co., the chocolate manufacturer, was for many years the major employer in the town. Dorchester once contained the only powder-mill, the only paper-mill, the only cracker manufactory, the only chocolate-mill and the only playing-card manufactory in the whole country. Shipbuilding began on the river as early as 1640. In 1832 a syndicate equipped four ships to pursue whale and cod fishery, and built twenty more schooners at Commercial Point. The Putnam Nail Company began the manufacture of horseshoe nails in the 1860s, and in the 1890s the company employed 400 to 500 workers, producing nearly ten tons of nails each day. Many fruits that became popular in the 19th century came from Dorchester: The Downer cherry; the Andrews, Frederick, Clapp, Harris, and Clapp’s Favorite pears; the Dorchester blackberry; and the President Wilder strawberry.

Dorchester has had many residents whose names have become famous. Richard Mather, pastor of the First Church from 1636 to 1669; John Codman, first pastor of the Second Church whose tenure lasted 40 years; and Father Peter Ronan, the prime mover behind the construction of St. Peter’s Roman Catholic Church are some of its most well-known religious figures. Some of the names recognizable from manufacturing include James Baker and Walter Baker from the chocolate business; Roswell Gleason, a pewter and silver manufacturer; and George Henderson of the Dorchester Pottery. Artists include Robert Ball-Hughes, an internationally known sculptor; Edmund Tarbell, painter of American impressionism; and Chansonnetta Stanley Emmons, photographer of rural scenes in the latter part of the 19th century.

Our writers include Oliver Optic (William Taylor Adams), author of hundreds of children’s books; Sarah Wentworth Apthorp Morton, poet of the late 18th and early 19th centuries; and Maria Cummins, author of The Lamplighter. The town’s most well-known activists, Lucy Stone and her daughter Alice Stone Blackwell, were active in many spheres, especially advocating the rights of women. Horticulturists include Samuel Downer, Marshall Pinckney Wilder and the Clap family, whose Clapp’s Favorite pear is still popular. Judith Foster Saunders and Clementina Beach were proprietors of an academy for young women on Meeting-House Hill. Edward Everett, the statesman, was born in Dorchester and lived there, while William Monroe Trotter who battled racial discrimination all his life came to Dorchester as an adult, and his house on Sawyer Avenue has become a National Historic Landmark.

Dorchester’s architecture is justly famous. All Saints Church designed by Ralph Adams Cram in 1892 was the model for American parish church architecture for the next 50 years. St. Peter’s Church is a magnificent example of 19th century American Gothic Revival. The former Girls’ Latin School built as Dorchester High School in 1899 in the Renaissance Revival style has been converted into the Latin Academy apartments. The first settlers of the town are represented by two surviving 17th century houses, the Blake House, ca. 1648, in Richardson Park on Columbia Road, owned by the Dorchester Historical Society and the Pierce House, ca. 1683, on Oakton Avenue, owned by the Society for the Preservation of New England Antiquities. Examples of 18th century homes and Federal era and Greek Revival buildings are scattered throughout Dorchester. Dorchester is especially famous for neighborhoods with architecturally designed homes from the second half of the 19th century. Its architects include Edwin J. Lewis, Jr., John A. Fox and Luther Briggs, Jr. among many others. The three-family home of the late 19th to early 20th centuries exists in Dorchester in every imaginable design, ranging from the Peabody at Ashmont Street and Dorchester Avenue, a building designed as a series of attached brick 3 family homes, to the freestanding three-decker. A walking tour of nearly any neighborhood will reveal a variety of building elements with appealing designs: original decorative shingles, stained glass, columns, and brackets.

Its close proximity to the ocean, with refreshing breezes throughout the summer months, superb views from its elevated points of Boston Bay, and harbor of unrivalled beauty, combining the freedom and delights of the country with the advantages and privileges of the city, pure invigorating air, good drainage, –all these features are steadily drawing the most desirable class of home builders. Most of its territory is occupied by handsome and attractive private residences, with extensive grounds, beautiful lawns, and shade trees around them.